Sulfagro Ca fertiliser was developed for crop rotations, assuming the action of sulphur and calcium in a cycle longer than one agricultural season. Depending on the soil type the fertiliser has various roles.

Our product may be used at any stage of cultivation but it’s preferable in the post-harvest time. The dosage of 1 ton/ha once every two years, is recommended for all type of crops and covers the nutritional requirement for two successive crops. It may be also safely used as a dressing at any crop stage due to its low salt index. The product must be mixed very well into the soil for the best results.

Sulfagro Ca is delivered in bulk or packed in 1 ton big bags.

May be stored indoors or outdoors, covered and protected. 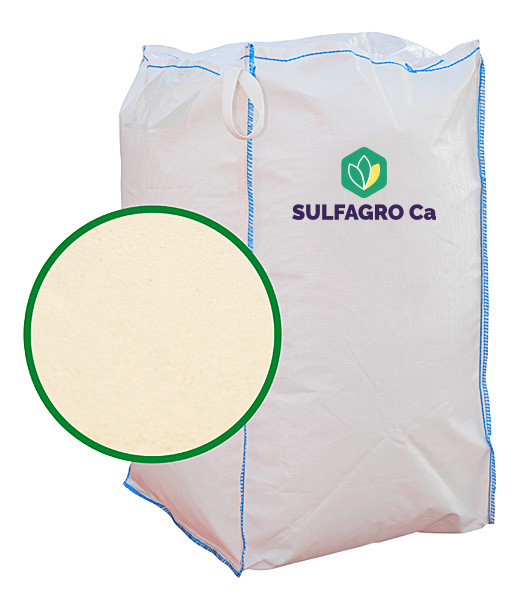 Use with liquid manure

Sulfagro Ca can be used as a suspension in combination with liquid manure.

One cubic meter of liquid manure contains an average of 3.5 kg of nitrogen (depending on the animal species and age group), which means that the limit of 170 kg/ha of nitrogen used with organic fertilizer set out in the regulation of the EU fertilizer directive about nitrates can be achieved at a dose of 50 m3/ha.

A significant part (up to 80%) of nitrogen in the suspension is readily available as ammonium and amide nitrogen, which is then quickly converted into volatile gaseous ammonia.

The magnitude of these losses is significantly affected by temperature. While at 15° C the loss due to volatilization can be about 35%, at 25° C it may reach up to 60%.

To reduce nitrogen losses when using liquid manure, it is recommended to add Sulfagro Ca to the suspension at a dose of 25 kg/m3.

As a result, more nitrogen in the organic fertilizer will be available to plants.

The described method of application not only has measurable material benefits, but also has a favorable impact on the environment. In this way, we protect groundwater and the atmosphere from pollutants.

Sulfagro Ca mixed with slurry forms a homogeneous suspension, which allows easy and even distribution throughout the soil profile.

We add to the liquid manure a dose of 25 kg/m3 directly when pumping into the tanker.

The suspension prepared in this way is applied directly by mixing with the soil.

We use cookies to ensure that we give you the best experience on our website. If you continue to use this site we will assume that you are happy with it.Ok